The story behind Cholesterol’s new single ‘Satan’s in Heaven’, which is taken from the EP of the same name is about the election of Donald Trump – fans of the great leader may want to look away now!

A is a jaunty gospel/country singalong that catches your attention and kidnaps it indefinitely – a hymn to idiocy, if you will.  The accompanying video is an artistic triumph, the perfect mixture of day glow laughs and acerbic criticism.

You can watch the video here:

Cholesterol was born on a US army base in Bavaria before moving to Boston, where he spent his formative years. After a period of twenty years living in New York City, he now splits his time between London, Boston and Cape Cod, his observations of the world around him keener than ever!

You can find more from Cholesterol here:

It’s not often that a collection of songs captures the imagination in a way that is both innovative, and steeped in history, but this is exactly what Julia Mascetti has achieved with her new EP – In Distance, Everything is Poetry.

Growing up in the UK, Julia was raised on a solid diet of English folk music and storytelling, but took to the harp after relocating to Tokyo to live with her boyfriend. It was at this point that her new passion for the harp was born, and inevitably, the cross pollination of her influences began.

Her lead track In Bloom is a haunting, crawling mish-mash of sound and emotion, driven by a dreamlike, picked harp that weaves in and out of subtle, tasteful sonic details that decorate the production of the track. It is this attention to detail that gives the track its brooding, dream like atmosphere, providing the perfect platform for Julia’s storytelling to really shine.

If you’re a fan of Joanna Newsom, Nick Cave or Kate Bush, Julia’s new EP will not disappoint. Check out a live version of In Bloom here and be sure to pick up In Distance, Everything is Poetry on the 10th of November!

The world is a wonderfully strange place when it comes to talent and skills. And now Antonio Domingos is part of a long list of world record holders and breakers.

Antonio has found great success in pushing himself to best of his abilities and is always progressing further. He has a YouTube channel named ‘Extreme Piano Channel’. in which he posts his various pieces showcasing his immense speed and endurance.

Antonio holds the world record title for  ‘Most Piano Key hits in one minute’. The pianist played the key B7, 824 times in 60 seconds, which seems humanly impossible, hitting more than 13 hits a second. this brilliant mind has studied and worked hard for many years, and has rightfully been handed this title.

Other musicians that hold a world record for speed and endurance include Nirvana Bista of Mussoorie in India, which he achieved in May of 2015. He performed ‘Flight of the Bumblebee’ in the tempo of 1600, which seems physically impossible, and through the footage, seems almost demonic.

However on the other side of the musical map, a title held by artist ‘No Clue’, aka Ricky Raphel Brown, is ‘worlds official fastest rap MC’, in which he rapped 723 syllables in 51.27 seconds, which is 14.1 syllables per second.

But Antonio, is now a world record holder, and this is an achievement of the century.

Receiving a commendation from one of the Godfathers of the experimental music scene would be enough for many artists, but Belle Chen, an Australian/Taiwanese pianist is continuing to push the boundaries of both electronic sound and classical music.

Where as many of us will go on holiday and take a few photos and buy a keyring that breaks with a week of getting back home, Belle has used her travelling experience to influence her experimental sound, picking up sounds and influences from the people and places she has visited. Her latest album has seen her soaking up the heart of Paris, marrying it with her own emotions and creating a deeply affecting collection of sound collages that is quite unlike anything you would expect from either traditional classical or futuristic electronic fields. 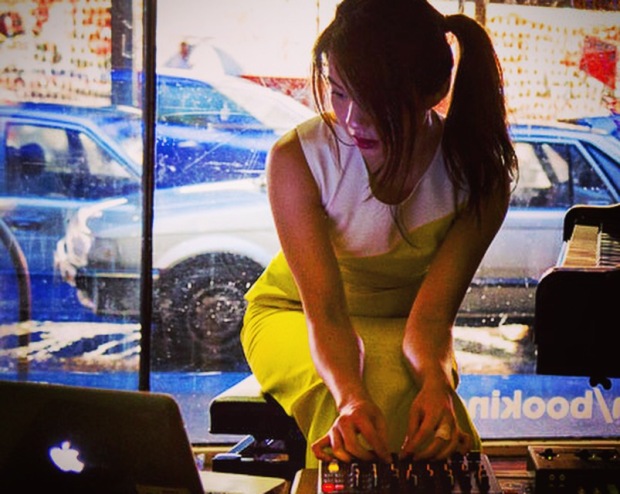 Her live work is just as cutting-edge, seeing Belle playing piano as well as manipulating and performing something akin to open-heart surgery on the instrument to create completely unique sounds, all the while using her Ableton Live set-up to add further textures to the experience. Belle will be playing live at London’s Bloomsbury Festival on 18th and 21st of October, alongside a live VJ and light-show

American composer Roger Rudenstein is bringing his unique take on using music to express his thoughts on the wider world to a new audience with his musical re-telling of James Joyce’s classic novel, Ulysses.

Written by Irish novelist, Joyce, in 1918, Ulysses sees a day in the life of Leopold Bloom in early 20th Century Dublin, at first glance a relatively straight-forward concept but elevated to epic scale. Echoing this approach is Roger, using a full orchestra and singers to bring the tale to life for an audience who, although maybe not familiar with the text, can find a new way of exploring this world.

Using the original, undiluted text (complete with sometimes risque language!) and marrying the rhythm and cadence of the language with his very European influenced style, Roger is ready to bring music and literature bang up to date whilst still being respectful of the traditions of both artistic styles.

Check out the evocative new video from contemporary composer and multi-instrumentalist Mihail Doman for ‘Arythmology VI’.

Find out more on Mihail below:

Hailing from Russia, Georg Roman is a musician packing some serious power. Underneath the calm exterior is a baritone that can really lift the roof. It’s a surprise that the venues he has performed at in the past, such as the Bonn Opera and the Bolshoi Academic Theatre are still intact!

‘Forever’ is Georg’s new single, a powerful combination of opera, classical and a hint of rock styling, with a memorable hook that you’ll be humming for days after listening to the track.

Music and singing has always been a part of Georg’s life, running alongside his passion for sport that almost saw him take on a career as a professional weightlifter and fighter. However, he eventually had to make a decision between the two and the musical world is glad that he made the one he did.

Music is clearly Georg’s calling, especially when you have a vocal weapon like he does. Comparing Roman to the likes of Placido Domingo and Luciano Pavarotti would be a huge compliment for the baritone singer, who idolises these icons of operatic music.